Welcome back to me! It's been 7 months since my last blog post. I fell into a well last October and have not had access to an internet connection until just this week. It was a difficult ordeal for me. I was fed through a garden hose they managed to snake down to me so I have been living off of oatmeal and water, I did get them to put a steak in a blender and feed it down to me but it clogged up the hose.

Anyway, last week was PASS SQL Rally in Dallas. I was lucky enough to get to go on the company dime and it was worth every penny. There were a bunch of great speakers and I learned a lot of good info that I can use at work. The only problem I had was deciding which speakers to go see. There were many sessions I wanted to see that were at the same time. I got some advice from a fellow CACTUSS member who suggested that if I had to make a choice to pick the speaker who wasn't local because chances are if they are local you can see them again at a local user group meeting or local SQL Saturday.

This week I am going to return to my Beginning SQL series and talk about SQL Server security. This is a topic where I am going to have to learn to practice what I preach. I have been known to take the quick and easy route when setting up security for applications that hit my SQL servers. The policy I should be following is the policy of most restrictive permissions. Don't give any user or app any more permissions that it needs.

Principals and Securables
The people or applications that are given access to your SQL Database are known as principals.  There are three different types of principals 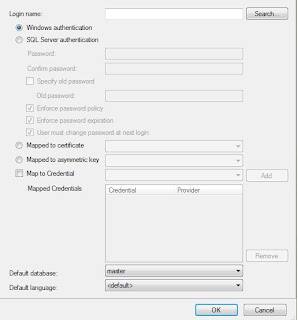 Database principals are the users that you can use to assign actual permissions to databases and database objects. While logins live at the server level database principals live at the Database level. You can have different database users and roles for each of your databases on the server. This allows the granularity of access control that I mentioned earlier. There are three types of Principals at the Database level.


Securables are the objects that you want to control access to. Objects in SQL server can be secured at three different levels.

Well, there you go the 50 foot view of principals and securables. Researching this piece really helped me understand the different levels of security in SQL server. If you want more detail on the subject I would suggest you pick up a copy of "Accelerated SQL Server 2008" which is available from Amazon in print or for the Kindle. Next time I will dive into the SQL server Agent.